Flavor & Fortune - Ginger in the Chinese Culture
"Ginger is a strenghtening food that has long been used for thousands ofyears to maintain health. Confucius always had ginger when he ate. He approved its use at meals and during periods of fasting or sacrifical worship when other pungent foods were prohibited. After a woman has a child, she is thought to need strengthening and nourishment. Many Chinese, particularly those from the Kwantung province, long-cook a dish of several pounds of pigs feet, a pound or two of ginger, and a considerable amount of vinegar. The gelatinous mixture that results is quite tasty and thought to be restorative."

Ginger and motion sickness...
Why is ginger ale served on airplanes? Many studies have shown that ginger eases motion sickness and aids digestion. Commission E (a panel of experts appointed by the German equivalent of the FDA and considered to be the worlds most reliable source on herbal remedies) recommends consuming ginger to prevent motion sickness. In one study reported in The Lancet, ginger capsules were more effective than Dramamine in reducing motion sickness induced by a revolving chair. It's no coincidence that ginger ale, as a soothing beverage, has been served on the airlines nearly since the beginning of commercial aviation. Today, more chefs in the travel industry (airlines and cruise ships) are appreciating ginger?s curative powers and incorporating it into many dishes, from sauces to desserts. As a flavor, ginger adds a clean freshness of its own while lifting the other flavors in a recipe.

A pain fighting food...
Mounting evidence suggests that ginger has natural anti-inflammatory properties. And you don't have to use a lot, says Neal Barnard, M.D. author of Foods That Fight Pain and president of the Physicians Committee for Responsible Medicine in Washington D.C. It works like ibuprofen, but without the side effects. Thing is, you need some ginger every day to feel the results. Slice a half-teaspoon to a teaspoon of fresh ginger and use it to flavor your stir-fry vegetables or sauces, or mix it with some boiling water and let it cool down before drinking. Runners World Magazine.

Ginger - a natural preservative and meat tenderizer...
Ginger is a great natural preservative, bactericide and meat tenderizer. Nigerian test tube studies show that ginger extract is effective in killing salmonella. Indian studies report that ginger extracts inhibit the fungi that produce aflatoxin, a potent carcinogen.* One study at the University of California at Davis tested the Nigerian results. Researchers there cooked and then refrigerated pork patties. Some were unspiced, some mildly spiced with ginger, some more strongly spiced. Patties made with ginger stayed fresh as much as a third longer than the unspiced pork. The enzymes in ginger are similar to papain found in papaya, which gently break down proteins and tenderize meats. *American Health Magazine

Does ginger burn fat?
Ginger is being investigated as a potential weapon in the battle of the bulge. Preliminary test-tube research shows that ginger boosts thermogenesis, or calorie burning. By measuring a complicated series of reactions in the tissue of rats, researchers found that ginger made the tissues use more energy than they would have normally. The researchers think the spice affects the nerves in some way. But we are still a long way from knowing for sure if eating ginger does the same thing in the whole body of a rat, let along in people. So for now, just enjoy ginger for the zing; if it burns off a few calories, call it a bonus. International Journal of Obesity

Ginger to warm you
Ginger has been shown to stimulate circulation and the warmth it imparts to the body corrects the surface chilliness associated with colds. One of our customers was recently diagnosed with Cold Poisoning and told by his doctor to eat ginger. He said that ginger helps keep him warm inside.

Storing Fresh Ginger
Fresh ginger will get moldy in the refrigerator. It's best to store it at room temperature much like you would potatoes. Ginger will eventually sprout little buds. These are considered a pungent delicacy in many parts of Asia. Just pinch them off and enjoy. Some people freeze their ginger, although we don't recommend it as it alters the texture and flavor. Others store their fresh ginger in dry sherry or Madeira in the refrigerator for up to 3 months. The ginger will impart some of its flavor to the wine, but thats a minor disadvantage when weighed against having peeled ginger ready and waiting to be used. The ginger-flavored wine can be used in stir-fry dishes, salad dressings, sauces, etc.

Preparing Fresh Ginger
To prepare fresh ginger, peel only the skin of this knobby-looking rhizome (an under-ground stem). Use a sharp paring knife. One ginger fan suggests scraping off the skin with an ordinary spoon. ?It works great and it seems like you don't lose so much of the good stuff.? Depending upon your recipe, fresh ginger may be sliced, diced, minced, grated, shredded or juiced.

Cooking with Ginger
Unlike any other flavor, ginger is unlimited in its culinary uses. From the fieriest of stir-fries to the sweetest of ice creams, ginger has the ability to cross over from savory to sweet. Rather than tinker with tried-and-true Asian recipes, seek other culinary marriages for ginger. Experiment with a small amount of fresh, pickled or candied ginger in a recipe and get into fusion cooking! Remember that a little ginger goes a long way. As you go, increase the amount of ginger to suit your personal tastes. Add ginger to soups, stocks, salads, vegetables, marinades, sauces and desserts.

Ginger as an Aphrodisiac
If youd like to whip up a recipe loaded with aphrodisiacs, try a recipe that calls for ginger, cinnamon and cloves - spices traditionally used for their ability to inspire lust and love. Gingers aphrodisiacal properties are tough to prove, but ginger does enhance circulation and has been credited through history with increasing lustful yearnings. 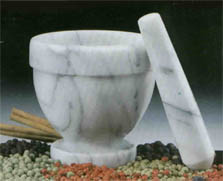 This is a solid marble mortar with a smooth marble pestle. It is used to make traditional pesto and aioli sauces. It is also great for grinding nuts and seeds for working with Dried Ginger, Herbs & Spices. This mortar is very thick and heavy so it won't move around while using it and it is very durable. The mortar is 4 1/4 inches wide x 4 1/4 inches tall. This mortar is unique, it is handcrafted for Chef Depot! This mortar is the nicest shape and finish of all the mortars we have tested! Solid marble is also the strongest mortar and pestle material.
Other mortars are available, please email us!